I’m originally a London boy. I was born within the sound of Bow Bells, which officially qualifies me as a Cockney, and I grew up in Tottenham – famous for its football team.

Like most other post-war working class families we were not well off. My father was a carpenter and my mother did what was usual for those times, she stayed at home and looked after the house. They did not get on.

Ours was a practical and pragmatic household so I was not introduced to any spiritual (for spiritual read religious) practices at home. My first experience of any form of religion was at the school assembly on my first morning. We all stood in the order of our respective classes while the headmistress issued various instructions then, to my amazement, everyone closed their eyes and started reciting what I later found out was the Lord’s Prayer. At the time I couldn’t understand why everyone was standing with their eyes closed talking to nobody. It seemed to me a demonstration of mass stupidity that I would never make sense of. Even so I somehow knew that I was expected to join in, and that not doing so marked me out in some way.

Although I’d had no exposure to religion I did have plenty of experience of what I now know as sensitivity to the spiritual dimension. I could see things in the dark that everyone told me were not there, and I used to freak out my parents when I explained how I could remember being a man when I was only four years old. I was firmly told to stop talking such rubbish. This didn’t stop me secretly thinking that they didn’t know what they were talking about. And it didn’t stop me remembering. But with no reference points to anchor the memories I stopped paying attention to them. However, I knew that I did not fit where I 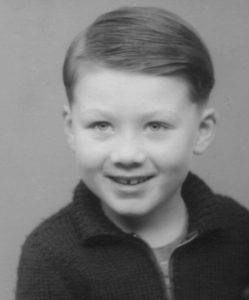 was. For a great deal of my childhood I harboured a belief that a serious mistake had occurred that somehow resulted in placing me in an environment completely alien to my being.

We moved house when I was about eight, to another part of the London. This meant I had to change schools, and it created a significant shift in how I expressed myself. At my first school, which was in a relatively rough area, I’d been bullied consistently as a consequence of my softness – that’s to say the silly way I thought about things. This taught me mistrust and reinforced the sense of being a misfit. However, I’d also been treated very sensitively by some gifted teachers.

The contrast at my second school was something of a shock. This school was in what was regarded as a much better neighbourhood, but there was harsh discipline for every minor misdemeanour. Strangely enough the punishment for minor infractions was the same as for outright heroic insolence. It was very clear to me what kind of persona I had to adopt if I wanted to survive, but it set me on a course of rebelliousness that has never quite disappeared.

Furthermore, at the new school we had Scripture lessons that taught Christianity in a fervently unchristian way. The incongruity of the cruelty of the teaching style with the teachings themselves taught me to view all organised religion with suspicion. It also initiated a long period of denial where I would have nothing to do with anything that had religious (for religious read spiritual) undertones. I also determined to conceal my sensitivity at all costs.

So by the age of ten I was turning into a free-thinking cynical and dissident atheist. I was also recoiling from festering tensions between my parents that seemed to grow with every passing day; tensions that were never reconciled in their lifetime together.

In spite of all this I passed the eleven plus and went to a prestigious local grammar school. By this time the patterns of dissent in my life had begun to set in with a vengeance. I was a

difficult student, refusing to waste my time in conventional study, but I totally absorbed anything that spoke to my interest ~ learning to play guitar when I was 13. And something or someone was looking after me. I didn’t do really badly, neither did I shine – I survived.

When the time came to leave the grammar school I purposely avoided an academic university education and chose a practical training in electrical and electronics engineering. I migrated into the oil industry (following the money) in my mid twenties and for many years was involved in the design of power systems for off-shore oil facilities. I settled into a conventional consensus reality kind of existence: marriage, job, home and affected a successful life-style. I was envied for my apparent prosperity. I was wandering in the wilderness.

In my mid thirties I started to wake up from the void of spiritual denial that I’d inhabited since I was ten years old. The pain and despair I’d been keeping a lid on suddenly hit me. I pretty much fell apart emotionally and teetered on the edge of nervous breakdown, although that was never diagnosed. I seriously considered suicide in what seemed to be a calm rational way, but made a commitment to sort myself out instead. I mention this in my book Developing Spiritual Intelligence – it was a pivotal moment for me.

From that point my old life virtually disintegrated. I went back to college as a mature student, gained a first class honours degree in English and went on to a PhD in Semiotics (Linguistics, Signs and Signification … and some Psychoanalytic Theory). My thesis explored how we make sense of things in general as if the world were a text. I looked at how linguistic theory developed through the twentieth century, weaving psychoanalysis with philosophy and literary theory. So I got an academic education after all (some of my associates like to call me ‘Doc’,  just to rub it in). At the same time as all of this I was meditating regularly and my subtle energy channels had opened up in a major way. I was all over the place trying to make sense of me and embracing the New Age with fierce determination.

As things began to settle I started to function as a shamanistic ‘healer’ doing the occasional bit of free-lance engineering design consultancy to make ends meet. I explored several energy healing models, but always struggled with the label ‘healer’ as from my perspective it cast me in the role of fixer. People seemed to expect me to understand their pathology in medical terms and I have no medical or clinical training (nor desire for any). This wasn’t

helped by a local family doctor who used to send me her hard cases, when I was living in Ireland in the 1990s. Nevertheless it can’t be denied that strange transformations did occur, and people found various conditions improved after working with me.

However, what has always fascinated me is the impact of the psychological and emotional on well-being. It was where I needed to go in myself to produce what self-transformation it is that I’ve achieved, and it’s where I seem to be able to support others most effectively. Over the years I’ve evolved ways to align with our spiritual essence to produce deep and sustainable personal transformation, helping people to reclaim themselves from the emotionally reactive debris of their past, from the tyranny of cultural imperatives and from issues that might be considered to have their origins in other existences. It’s this work that forms the basis of my private practice and the workshop seminars I give.