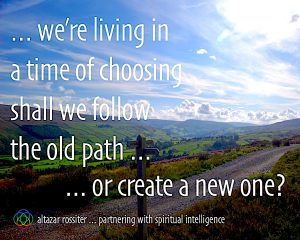 Early on in my work in the corporate world I used to design electronic control systems. It’s what my original training was about. One of the important characteristics of those systems is called the SIGNAL TO NOISE RATIO. What it means is that if there’s enough noise the signal you want to track, receive or transmit is obliterated … and the system becomes chaotic. The higher its signal to noise ratio, the better a system functions.

In human terms you can think of it like being in a room full of people who are all shouting about things you have no interest in, while you’re trying to have a conversation with someone on the phone – or even next to you. The signal has to be very strong to get through, or it’s drowned out and you fail to get the message.

Something of this kind can be considered to be happening now, in the everyday environment we inhabit. The question is: What’s the signal, and what’s the noise? The answer to that depends on the message you want to transmit or hear.

And this is where we each have to make a choice … take responsibility for ourselves, for what we choose to hear and act upon. The struggle is whether to trust the feeling of what is truly a match for your energy, your heart, your soul … or what you have been trained to come into line with.

This struggle is intensified by the conventional beliefs of the social order we inhabit. It doesn’t matter whether those beliefs have been manufactured or agreed by consensus. The way it works is we either comply with the majority beliefs or we’re rejected, excluded, exiled or outlawed.

OUTLAWS …
It’s interesting to note that under the system of law that existed in Europe in the middle ages, “out-laws” were exactly that: outside the law. Outlaws forfeited all rights allowed by the dominator culture that outlawed them. As such they could be persecuted/killed/murdered at will by anyone, without incurring any retribution from the prevailing social system. Murdering them was in effect regarded as a service to society.

Since those times the system has grown arms and legs, but it’s essentially the same. Go against  a governing system that’s been fabricated to ensure that it is sustained through a top-down architecture of privilege and the consequences can be severe. But that doesn’t mean everything about the system is wrong. There can be many aspects that you resonate with in truth, and many that are totally abhorrent. So tuning into your personal truth and trusting that is extremely challenging.

TUNING INTO YOUR FEAR …
There is one guiding principle. It may be a surprise to some that this principle is fear. Much of what is offered as conventional wisdom is rooted in the fear of some dire consequence – something to worry about. This is the process by which we’re encouraged to identify a problem and react to it with fear. The solution is some kind of protection strategy, which generally creates a contraction in how we allow ourselves to express. A box to stay safe in.

Fear can also be triggered when the heart whispers an inner truth. The heart has a habit of signalling a path of love that doesn’t fit with how things are supposed to look. The fear triggered in this experience also suggests potentially dire consequences, if that impulse from the heart is embraced and followed.

ASKING YOUR FUTURE SELF …
A test for how the impulse from your heart is informing you is to explore what it would feel like if you actually gave yourself permission to follow it. Any sense of expansion and aliveness defines the impulse as an invitation to embrace the truth of who you are. But if you get a sense of contraction, dejection or resignation it’s more like an invitation to your own funeral. In the same vein, it’s also worth exploring what ignoring the impulse would feel like.

Ultimately it doesn’t matter how loud and clear the signal is from outside, if it doesn’t match the whisper of your heart to love and live life it’s noise. And that tells you about the system.

So the crisis that we’re in right now can be considered an information system. Interrogating this system in relation to your personal fears will tell you about the truth that manifests through you. What you choose to follow determines the reality you’re choosing to inhabit.

PERSONAL SOVEREIGNTY …
Let’s be clear. This is not about choosing sides or supporting a cause. This is about owning and standing in the power of your own truth. It’s about embracing your personal sovereignty.

There doesn’t have to be a public proclamation, but you do need to be aware of the energies in play and how they might influence you. Because even refusing to choose is a choice, and those who do choose sides may well interpret your choice as a declaration of hostility.

One of my favourite quotes is from “Leaves of Grass” by Walt Whitman: “… re-examine all you have been told in school or church or in any book, and dismiss whatever insults your own soul …” It seems to me that this is so relevant in the situation we’re living through now, where much of what we’re being told may well be insulting to the soul. We’re in a time of choosing.