One of the things I realised when I started to understand myself as existing beyond my physical body is that my energy field interacts with the field of everything in my environment. It took me a bit longer to recognise that the energy field of my environment is a synthesis of everything in it, including me. Everything is continually merging and interacting. And if you bother to stop and tune in, you can feel it. 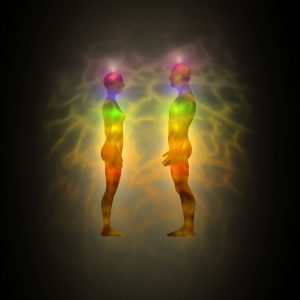 This is a phenomenon that’s easily demonstrated with a few simple questions:-

What’s really interesting is that these, and other, invisible interactions actually occur. Most people know them at some level, and the more sensitive you are the more significantly affected you can be in the process.

Catching Energy from Others
A good few years ago I had an experience that woke me up to the kind of unseen interference that these interactions can cause. I was just getting into my own spiritual exploration at the time. One evening I went to a healing and meditation group in one of the less wholesome parts of London. It was a lovely meditation and I was feeling pretty uplifted by it. I made my way home feeling great.

To get home I had to take the tube, a journey I thought nothing of as I used the underground daily. When I got onto the Northern Line platform it was necessary for me to pass by a group of young men who were in a quite different space from me. They were angry – not with each other, but with the world, and they were expressing their resentments passionately. I recognised that not so very long before I might have been part of a similar group, but I paid them little enough attention – or so I thought – and walked past.

When I got home however, my uplifted mood had completely evaporated. I was grumpy and short-tempered. My partner immediately noticed it and called me on it. Initially I was pretty sharp with her. But then I started to question what had happened between my meditation experience and arriving home. There was nothing of note, but the picture of the group of young men on the station platform kept coming back to me.

The light bulb moment was the realisation that I’d somehow ‘caught’ their resentment through an unconscious and invisible interaction. It was quite an eye-opener. But once I’d opened up to the possibility of this my mood began to shift again. Once I accepted it my grumpiness was gone completely. That’s because it wasn’t mine, but nevertheless I’d somehow taken it on and owned it.

Sensitivity
I realised that this sort of thing must be happening all the time all over the place. It’s a universal phenomenon that’s completely off the radar, and the more sensitive you are the more you are likely to be caught by it. The funny thing about sensitivity is that we are all very sensitive, some of us just got very good at shutting ourselves down so as not to feel the chaos, pain and conflict in the field around us – but that’s a story for another time. And, of course, your sensitivity is actually a vital part of your guidance system – telling you what nourishes you and what drains you, once you learn how to manage it.

The fact is we interact with everything, whether we know it or not. So a really good discipline to develop is to pay attention to your mood shifts and ask internally what they’re about. If you can’t identify an answer that resonates the chances are you’ve picked something up that doesn’t belong to you. If you feel yourself changing as you open up to that possibility then you know that’s almost certainly what’s happened. You should then find that it’s easy to let it go. Ask Divine Intelligence to transmute the energy of anything you’ve picked up that drains you into love and return it to its source. Make this request aloud if you can, using these words:

Divine Intelligence partner with me now and transmute the energy of anything that drains me, that I’ve taken on from my environment or anyone it, into Divine Love and return it to its source. Thank you. And so it is.

It’s also worth remembering that your energy is continually added to the collective mix. That means as you personally become clearer in your own evolutionary awareness your contribution to the collective follows suit. You are in a position to influence the environment that others inhabit through the invisible interaction of what you feel in, and express through, your heart. This is nothing less than awesome.

Image: by Vit Paroulek on 123RF