Your sovereignty is your ultimate right to self-determination. This right has always existed, but it has been concealed from the general awareness of humankind rom the genesis of the species. The same concealment has been applied to the direct connection with Source that is inherent in every individual.

These attributes have been programmed out of human awareness. That programming has supported, and been supported by, indoctrination and beliefs that defeat nearly all attempts at self-empowerment.

That programming conditions the mind-sets of the social orders we exist within . They demand our compliance. When persuasion fails to result in compliance, coercion and force are employed. So fear becomes the underlying paradigm of existence.

This has created a kind of consensus reality matrix [CRM], which forms a psycho-energetic controlling overlay. It works through our own inner mental/emotional faculties, triggering reactions whenever the programming is challenged. 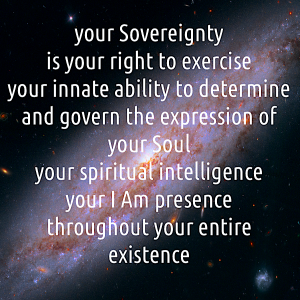 The consensus reality matrix informs the everyday existence of the majority of people on the planet. It has regional variations that provide for cultural differences to be escalated into conflict. It tells us what we’re supposed to think, feel and believe and how we’re supposed to behave.

There are huge questions yet to be answered about the origins of humanity, and about the ancient programming that persists beyond the reach of many personal transformation practices.

Some of those questions will be considered from an unconventional perspective during this intensive, along with some of the evidence for genetic interference from extra-terrestrial intelligences.

The intensive concludes wit a Ceremony for the Declaration of Sovereignty: This is a powerful in-depth practice to reclaim the freedom and autonomy of the human spirit, your connection with Source, and to eliminate the psycho-energetic practices and influences that undermine your discovery and expression of your true self. This will shift your reality.

The shift in the ages that is now upon us creates a magical opportunity to move forward into a new self-empowered consciousness.

Beyond the Consensus Reality Matrix

This four-day workshop intensive has evolved from the familiar protocol practices of Partnering with Spiritual Intelligence shared in regular workshops and the Mystery School. At the end of the intensive you will have more awareness and insight into ….

A detailed set of notes, with references for further research, is provided to all participants. The notes outline the background of human origins from a perspective that goes beyond mainstream conventions.

The notes are supported by examples from widely available video clips that help to join the dots of various theories. This helps to establish an expanded sense of the “bigger picture” of human existence and the genesis of humankind.

The threads of genetic engineering and alien intervention are addressed with reference to modern and ancient texts. The potential impact of these phenomena on our collective and individual development is challenged, via a set of intentional narrative protocols especially created for this intensive. Those protocols include the following elements:

… Defeating and deleting programmes to comply with false and oppressive authorities
… Clearing imprints that set up the constraints of a cultural psycho-energetic control matrix
… Clearing implants that lock the imperatives of a consensus reality into the human genetic code … especially those that support submission to the dominator consciousness widely regarded as an abusive masculine principle.
… Clearing the ancient implanted genetic codes that drive slavery. This includes the programming that drives us to overwork, over-give and burn ourselves out in the work ethic that equates personal value with productivity and service to an external agency.
… Clearing the implants and imprints that perpetuate the acceptance of hierarchic control systems, and enforced compliance with these systems.
… Clearing the implants and imprints that suppress the inherent spirituality of human consciousness and prohibit its natural expression.
… Clearing the trauma and death imprints created over many lifetimes where there has been violent suppression of the natural expression of human spirituality and wisdom sharing.

You will be integrating insights and wisdom that will shift your perspective on the world. This will continue well after the four days spent at the intensive.

This is a deeply transformative experiential workshop. It is open exclusively by application, to experienced Energy Sensitives and evolutionaries who are already aware of the fundamental anomalies in world governance, and who want to delve into the mysteries of the spiritual genesis of humanity.