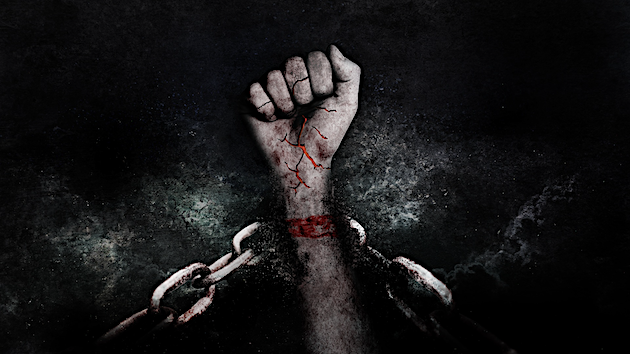 In our sanitised, everyday, civilised world nobody owns slaves any more. Slavery and forced labour were abolished over 200 years ago in Britain, so it’s perhaps surprising that the practice was not fully outlawed worldwide till 1981. The abomination of criminal human trafficking is still widespread.

However, notwithstanding its abolition, slavery persists under the surface of many cultural norms. Acceptance of those norms is often a requisite of good citizenship.

In the mainstream depiction of slavery, the value of a slave is directly related to the capacity for work. The more work a slave does the more value s/he represents for the owner. Increased productivity equals increased value, which translates into improved potential for retention … and greater chances of survival. The slave with little value is set to be replaced, or simply disposed of. This is an existential principle that resides in what we’ve learned to call free society, as a work ethic. It’s dignified by qualifying it as a virtue.

Those drivers are imprinted through social conditioning and religious dogma. They form a psycho-energetic environment that coerces you into compliance, punishing you for dissention. That punishment will show up externally in various forms of rejection, criticism and legitimised abuse. But it also manifests psychologically, through inner conflict, low self-esteem and self-rejection. This happens because you will be at odds with the ideals you’ve been groomed to believe in through education and socialisation practices: you know deep within that you are never going to fit into the system at the same time as being in integrity with yourself.

So, if a residual slave culture persists, what about the question of ownership? Who owns you? And the short answer to this is the state.

Under the various social systems that prevail in the world, the state or its agents have the power to intervene in every aspect of your life. You can legally be deprived of your freedom, your wealth, your children and your life. Laws are designed to sustain this situation as the state deems appropriate.

Checks and conditions may be included, giving an impression of fairness, but the bottom line is that whatever you think you own can be taken away, including you. This is especially evident in times of “national emergency” or war, where the existence of the state is threatened and you are simply a resource to support its survival.

In the everyday run of things you are allowed to go about your personal business in any way you choose that broadly complies with the dominant social order. That even includes a degree of political dissent, which establishes a reasonable illusion of freedom. However, it’s likely that you require government permission [on payment of a fee, or tax] for almost everything, right from the moment of your birth.

All of this forms part of the consensus reality matrix that we exist within. It governs how we relate to ourselves, each other and the world in general. Awareness of this situation always arises, sooner or later, in the process of conscious spiritual awakening … which may be why natural spiritual practices have been violently suppressed down the ages.

As awareness dawns, the initial reaction is often outrage. Many people get side-tracked into crusading against the system. Some go even further and attempt to change it by violence.

But revolution is only partially effective and history shows that the changes achieved are generally only temporary. Soon a similar system emerges with control strategies of a different flavour, but similar effect.

Any revolution that is set against a system is self-defined in relation to that system. That means it is still tied into it. That kind of revolution is born out of what already exists, out of what is known. The way forward is through awareness and evolution.

A curious consequence of awareness is that once you become aware of anything that oppresses you, you are no longer a victim of it. You are at choice, which means you are empowered to make a conscious decision about how you interact with it. You may not like the choices available, but you know where you are and you know that you are choosing.

The significance of this awareness cannot be over-estimated. It’s actually earth-shattering, or more accurately consensus-reality-matrix-shattering. That’s because the consensus reality matrix is self-perpetuating as a psycho-energetic mind-field. It’s a self-sustaining entity that’s virtually inescapable, because it’s an aggregate generated by the collective; it’s an ensemble phenomenon.

You, and I, and everyone else living in a particular community contribute our own vibration to the collective mind-field. Our vibrations radiate into it from the electromagnetic elements of our beingness. That means as more and more people raise their level of awareness, the general level of consciousness informing the field rises. Old existential paradigms start to collapse, we’re already seeing some of this. The establishment systems of control start to implode because the unconscious energy sustaining them is withdrawn.

But there is a paradox that has to be negotiated. The paradigm we’re looking to change, or escape from, has to be accepted for what it is without seeking to change it. It will transform automatically as its component parts change. And how you interact with it will change, because you are now contributing to a new existential field. That new field is the ground of a new reality that becomes more coherent as you align with your own truth and align with others doing the same. No-one knows what this is going to look like, but this is the adventure of transformation and the key to becoming free.