Human history is characterised by an incessant quest for power and control. The root of this is fear, and it’s been the dominant paradigm of our existence for age upon age. This paradigm is now crumbling around us. It’s reached its “Sell by” date. However, this does not stop vast numbers from trying to hang onto it. 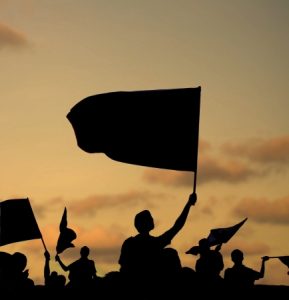 The new paradigm has not yet formed. It’s still in the realm of the unknown, which qualifies it in some ways as something to fear.

Approaching the new paradigm from a place of fear is not going to work. It has to be born out of a raising of consciousness, emerging from within. That birthplace is the heart and to open the channel requires courage and commitment.

Traditionally leaders have risen to positions of power by beating their rivals into submission. In ancient times it was the strongest, often the most psychotically brutal, who got to be the richest and most powerful, sitting at the top of the pile while everyone else was forced into servitude. And this begs the question of what drove those people to climb to the top in the first place. If you consider this as fear – fear of their own insignificance in the scheme of things – it’s possible to see how the insanity of the social systems we inhabit nowadays evolved.

POWERLESSNESS
As an individual in a human body it soon becomes apparent that you have little power over anything in your external world. This is fertile ground for fear, frustration and resentment to grow into a determination to take control of the factors that will ensure your continued existence – a hunger for security. This hunger feeds monsters: acquisition, consumption and control. It sets the scene for the strongest most ruthlessly violent to assume positions of power and leadership by means of force. By curious paradox these kinds of leaders, whilst appearing to be the most fearless, are potentially the most fearful, where their fear has driven them to their positions of dominance. Fear of taking action against them keeps them in power.

This is not rocket science. It’s basic root chakra survival strategy. People at the bottom of the pile suffer, whilst generating the collective prosperity that everyone needs to survive. If you can’t beat them join them. So armies of compliance are formed comprising individuals banding together out of fear to ensure what they fear will not assail them.

WHEN THE CAUSE IS JUST
History shows you that pretty regularly, at some point, the oppressed at the bottom of the pile find a champion strong enough to take on the bullies at the top. The old establishment is swept away and a new one put in place. When this is successful it quickly morphs into a similar institution to the one it replaced, because it retains the same basic power structure: a principal leader at the top and a hierarchy of supporters just underneath, with those working to generate the true collective wealth right at the bottom.

This insistent belief that someone will come along and put everything to rights
is one of the biggest disempowerment issues facing humanity at large.

If you just want someone to make all the problems go away you are actually part of the problem, albeit unwittingly. The collective impact of this level of consciousness creates an energy matrix that sustains the status quo.

THE TIDE OF TRANSFORMATION
Nobody is going to make your problems go away. That’s your job. And as you embrace it the problems in your world start to dissolve – even though you may not notice it immediately. You create a ripple in the pool of humanity that influences others in the pool, which influences yet more others creating more ripples. These ripples are cumulative, and they effectively generate a tide of transformation.

The tide is already in motion. It’s starting to wash away the foundations of the old fear based power structures, which in turn are beginning to crumble. Remember these power structures are top-down devices impregnated with and sustained by fear. The controlling powers are implicitly fearful of this tide of transformation and will consequently resist it at every turn. That resistance will be characterised by the injection of more and more fear into the matrix – and this will be felt by everyone.

Understand that the fear injected into the matrix may be made manifest in physical reality – acts of terrorism, war, disease scares and economic crises, but it is primarily mental. It will impact your solar plexus, which is where your mental body connects with the matrix, and induce anxiety about your future. Whenever you find yourself worrying about what’s going to happen recognise this as a mental body reaction. It is not in the moment, unless you are personally involved in a situation.

RESPONSIBILITY
The way through this is to take responsibility for your own empowerment. This has nothing to do with having power over others; it’s entirely about being true to your heart, and that will challenge your mind to the point of melt-down. No-one’s pretending that this is easy, and it’s important to have the support of others on a similar path for some of the process. But you can begin by affirming to yourself every day:

Do this aloud. Using your voice and your breath gives a clear message of intent to the Universe. Then watch as your own fears start to surface, and when they do bring your attention to your heart. Breathe into your heart and say … I invite Divine Intelligence to partner with me now, to infuse this fear with love and return it to its source.

Check out the availability of the Altazar Method Self-Empowerment and Facilitator Training workshops here.