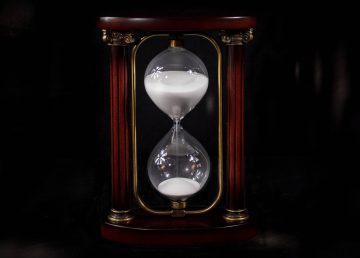 An awful lot of people are now feeling that the world is just wrong, without knowing what’s wrong or how to be with that feeling. There are also a lot more people wondering what’s wrong with those of us who feel that the world is wrong. But the balance is shifting; it’s a bit like the sand running from the top of an hour glass to the bottom. We might be in the minority, but we won’t be for ever.

The flaws in the systems of social control that we’ve been used to, and have repeatedly ignored, are now being exposed in ways that are simply too explicit to overlook. Everyone is shocked and angry, but still nobody really wants to know just how bad it is.

Nevertheless, those control systems are crumbling. The sands of time are running, and no-one knows what will happen when they run out.

In response to this the “Old World Order” is frantically scrambling around trying to establish a “New World Order”. This would effectively turn the timer upside down and start it running again.

War Consciousness
A pernicious imprint persists in human consciousness as the belief that someone will turn up to save us. Those looking to impose a New World Order are banking on that, because they’re prepared to step in with new systems of control and assume that saviour role. They already control most of the media, which is kept busy telling us what to think and how to be, and that what we feel about the wrongness of the world is irrelevant.

But the wrongness is starting to scream. And the scream is getting louder, because everywhere you look the interests of ordinary people are being overridden by the interests of the controlling power-base factions. Those factions are actually engaged in ideological power struggles between themselves, which is one reason why the pain real people are having to endure never seems to be addressed. And people in pain are likely to follow anyone who promises to eradicate that pain – the Saviour Syndrome, [something I’ve written about before, see Taking the Red Pill].

The reality this underwrites, and which we inhabit, effectively grooms large groups of people to see other large groups as enemies. War is encoded into the psycho-energetic substructure of this level of consciousness. This is how humanity has been controlled and oppressed through countless cycles for millennia. That control has been implemented via fear and the medium of physical violence.

Freedom
It takes courage even to consider this, because you have to take responsibility for it. The chances are you’ve been part of it for lifetime upon lifetime, as have your ancestors – mine too. We’ve been part of it and party to it. We’re steeped in it to the point of saturation. But that saturation effectively means we’ve reached the limit of our capacity to function in accordance with those old energy control imprints. What this generates is an incredible level of inner conflict and stress.

Your mental capacity to maintain this consciousness [if you’ve got this far] has probably been stressed to breaking point. You know the mainstream paradigms and cycles of existence currently on offer are unsustainable and exhausted. They’ve reached their sell by date, but you are awakening to yourself and you’ve stopped buying.

Once you decide to abandon those old existential paradigms, and find a different way of being, you’re on the way to getting free. That freedom is essentially a shift in consciousness. To make that shift it’s important to look at the old order with compassion whenever it confronts you – and sometimes it will slap you in the face – and ask yourself the question: What would love do?

If there’s no love in any of the available options, you’re actually being challenged to find your own empowered solution to how you might need to behave and negotiate the situation you’re faced with. That may be to walk away, invite your heart to give you the answer and wait until it does. Taking sides will only ever make you someone else’s enemy. Try it and see.