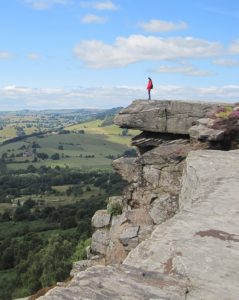 The Edge … there is no honest way to explain it because the only people who really know where it is are the ones who have gone over.

Few of us have any idea of where a personal journey of self-discovery will lead us, when we set out. Generally the first step is to get beyond the New Year’s Resolution psychosis. You know, where you say you’re going to change things but never quite follow through. Just keeping your promises to yourself, when you’ve decided to make even minor changes in your life, is a major achievement.

However success breeds success. So once a minor change has been accomplished the chances are you’ll notice something else that you want to change. It’s a bit like walking through a doorway only to find that there’s another door to go through, one that you couldn’t see before you walked through the first. But now you’re there, well it’s obvious, you’ve got to go through.

After a while you’ll have walked through so many doors you couldn’t find your way back, even if you wanted to. And each door will have brought you to the threshold of some new aspect of yourself. By this time you’ll have become quite comfortable with the process of change. So, as you discover and connect with more of your personal truth you become hungry for even more.

Head On
You might face into this literally “head on” knowing that you’ve decided to change and that means a few alterations to the way you conduct your daily life. You’re prepared for some resistance in creating new habits. It’s all perfectly reasonable and the whole business will be under control.

At some point you will hit the wall, we all do. It’s the place you just can’t seem to get beyond, without completely abandoning the life you’ve been leading – or so it will seem.

One of the scariest experiences that turns up on a committed personal spiritual journey is when you’re faced with the realisation that everything you’ve defined your life around has to change. When that realisation truly sinks in, the level of terror that arises internally can be overwhelming. It can be so overwhelming, in fact, that your sanity might seem to be at stake and the only logical course of action is to back away. That’s because this situation cannot be met head on, by which I mean literally head “on”; it can only be negotiated head “off”.

The more your head is switched on the more panic, chaos and confusion you’re going to experience. This will happen even though you may know intellectually what’s going on. So how are you going to switch your head off?

The answer is you’re not, because it can’t be done unless you resort to an artificial intervention like drugs or alcohol.

This situation is possibly not what you might have expected to arise from following a spiritual path, looking for stability and peace. Nevertheless it’s exactly the way it has to be. For you to evolve beyond the limiting beliefs that keep you locked inside yourself it’s not merely a matter of opening the door and walking free. The beliefs that make up the walls of your prison have to crumble.

This is a self-sustaining mental feed-back loop spinning out of control into a vortex of fear. And it’s almost impossible to see, especially, when you’re caught inside it. It’s nothing less than the edge of reason – your reason.

Head Off
There is only one way for you to go now, through the vortex. Most of us are pretty much on our own with this. We won’t have shared the state we’re in with anyone, close or otherwise, for fear of their judgment. Not only that but few people are equipped to deal with this kind of situation so underneath any judgement that comes at you will be a deeper fear response.

You now know that your reason will not get you out of this. It’s your reason that’s driving the mental vortex. So the only sensible thing to do is let go of your reason. This is potentially the biggest fear: losing your reason. But it’s the only way through, and paradoxically it’s pretty reasonable. If your reason isn’t working then let it go – stop relying on it. Think about it!

This will teach you one of the most vital truths about the human condition. Your reason is only a tool, and it has limitations. It’s a kind of linear step by step function that you’ve relied on to keep you safe – and it will do so again. But right now it’s found its boundary – its edge.

So what you have to do is continue to go through the essential daily routines of your life without reason, and let your life show you its way. If your intent has been to be clear, conscious and self-empowered, then you’ve been heading in this direction for a while. Simply knowing this will help you negotiate the terror that presents as you move beyond your old self-identity.

If you think about it, the edge of reason is exactly where the path runs out and a leap of faith has to be taken. You don’t get to this point in one go. It’s the result of a dedicated conscious journey, and when it happens it’s because the time is at hand for you to step up and knowingly be who you are.

1 thought on “The Edge of Reason”